Dashboard
An all-in-one package for backtesting, scanning, trading, and risk.
Historical Quotes
Live minute-by-minute to nightly updates of the best quotes in the industry.
Dividends
A comprehensive view of forecasts and historical dividends.
Earnings
Get a robust feed of dates, status, and expected or implied earnings.
Blog
Support
About
Log in
Dec 05, 2022 • Options Strategy • Case Studies • put spread • 5-min-read

Semiconductor stocks have rallied big off the market’s October low
A way to play a near-term consolidation or bullish take on the space is with a short put spread
Lam Research features a favorable risk to reward setup, and we outline an options play on this chip name


Call it a chip comeback. The VanEck Vectors Semiconductor ETF (SMH) has outpaced the S&P 500 ETF (SPY) since mid-October. Generally decent industry earnings reports despite dire fears, some optimism in China in recent weeks, and lower interest rates have all been tailwinds for the embattled semiconductor industry.

Some of the group’s biggest stocks have seen major snapbacks, but many investors wonder if it is yet another bear market rally. Today, we’ll look at one name that is reasonably valued, features a somewhat bullish chart, and has attractive options to play from the neutral to long side. 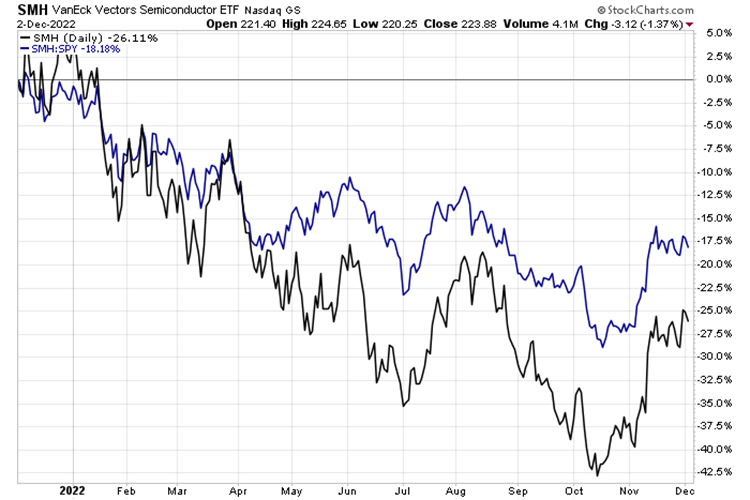 With this idea, we identified stocks with strong underlying fundamentals that trade at reasonable valuations. Also important is a good technical setup so that we can spot favorable risk/reward plays with key price levels to watch. The options trade is a bullish out-of-the-money short-put spread with limited risk. Overall, we are looking to find the best options value based on the historical distribution of stock price returns.

How We Found the Idea

With a focus on value, liquidity, and stocks without a near-term earnings event, we screened for equities with trailing and forward price-to-earnings ratios between 10 and 25 – that rejects non-profitable firms, possible value traps, and shares that are too richly priced. We also wanted to home in on companies that are still valued highly by the market, so we filtered for those with price-to-book ratios above 5. Of course, with options, volatility is important, so we included only companies with an earnings announcement more than a month away. Finally, market caps larger than $20 million and firms with more than 5,000 employees were considered.

The top result was a bullish short put spread on Lam Research (LRCX) expiring on December 16. The $415 and $420 strikes are used. With a risk to reward ratio of 1:5.5 and a high probability of profit of 85.5%, the trade looks good for those with a near-term time horizon. The max gain is $78 while the max loss is $422 as of the close on Friday, December 2. The delta is low at just 0.03 and the market width is 16.4%. In all, you’d collect $0.77 of premium and would see a max gain so long as the stock is at or above the higher strike put at expiration.

The profit and loss distribution illustrated below shows that shares can pull back further before losses are incurred.

In the graph below, the green shaded area is your profit payoff at various stock prices above the break-even of $419.23. The red shaded area below the break-even is the loss amount. The maximum loss is capped as the difference between the strikes less the amount of credit you received for selling the put spread. Here, the max loss is $420 minus $415 plus $0.77 times 100 (options prices are communicated on a per share basis but actually represent 100 shares per options contract) equaling -$423. The max gain is the amount received for selling the spread of $77. 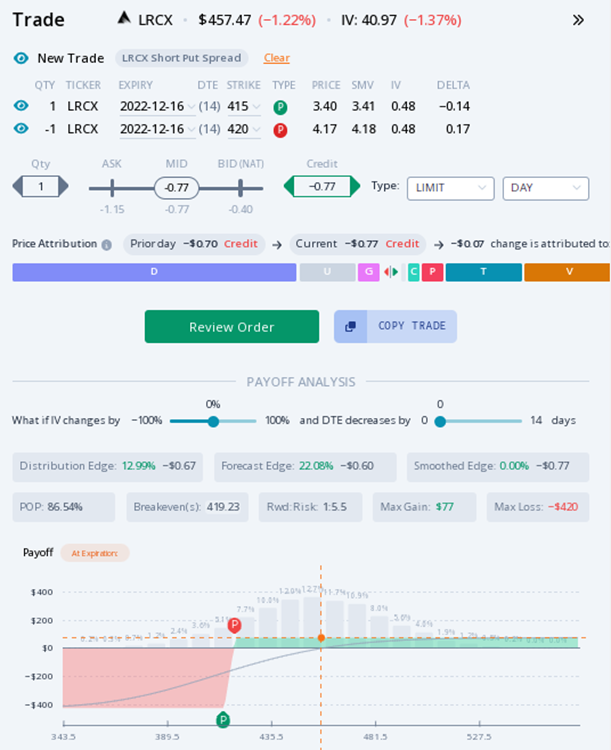 Let’s dive into the fundamentals and, later, the technicals of this neutral to bullish trade on Lam Research.

After a tumultuous couple of years and more uncertainty ahead, LRCX remains the second-biggest semiconductor capital equipment company, according to Bank of America Global Research. Its unique industry position should allow the firm to weather economic uncertainty due to less cyclical exposure compared to its peers. Improved pricing in the chip space and loosening supply chains are potential tailwinds.

On valuation, earnings growth is seen as being difficult in the next two years before a 2025 rebound in forecast per-share profits. Dividends, meanwhile, are expected to grow in the coming years. With forward operating and GAAP P/Es in the low teens and a below-market EV/EBITDA multiple, the stock appears to have priced in a lot of negativity. Finally, LRCX boasts a strong 10% free cash flow yield using 2023 estimates. Overall, with shares almost 40% off the high from almost a year ago, there appears to be value in LRCX.

Looking ahead, there are no major volatility catalysts in the coming two weeks. The next earnings date is unconfirmed for Wednesday, January 25 AMC.

LRCX has recently rallied to near its declining 200-day moving average. Shares poked above that important trend indicator last month, but then wavered back below it on light volume recently. Notice in the chart below that the stock has found some near-term support near $440 – there is a mid-November gap there that was filled and successfully defended in recent days.

Also, the stock featured a major winning streak during the back half of October around and following its earnings report on the 19th of that month. The share price surge off the $300 level came on impressive volume. All told, the rally was nearly 70% to the mid-November peak, and the current consolidation, which has the hallmarks of a bull flag, should promote the chance of more consolidation above the high strike put outlined in the trade idea.

Lam Research shares are taking a breather after a monster rally off the October low. The corrective pattern comes on low volume with support at $440. Options traders can play this trend with a short put spread using the $415 and $420 strikes expiring December 16.