Dashboard
An all-in-one package for backtesting, scanning, trading, and risk.
Historical Quotes
Live minute-by-minute to nightly updates of the best quotes in the industry.
Dividends
A comprehensive view of forecasts and historical dividends.
Earnings
Get a robust feed of dates, status, and expected or implied earnings.
Blog
Support
About
Log in
Aug 10, 2020 • News • options trading • KODK • 1-min-read

Kodak's Turmoil As Seen Through Options

Due to a SEC investigation and increased scrutiny, the $765 million dollar loan to Eastman Kodak (KODK) from the federal government to make drugs has been put on hold.

The options market tells the tale. On 7/27/20 the average number of options that trade in the entire options chain for KODK was 115 contracts for the trailing 20 days.

The implied volatility shot up over the period. On Monday the 27th IV was up 10 points from the previous Friday indicating buying of options. On the 28th it was up 140 points to an incredible 271%. 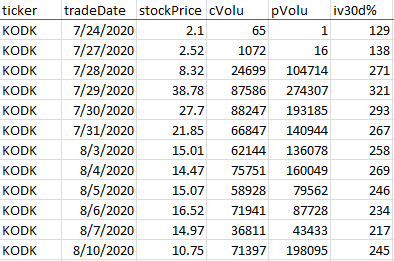 What a lucky trade!

Today, with the stock price back down to $10.75, IV is at 245% as options traders expect more craziness in this stock.