Dashboard
An all-in-one package for backtesting, scanning, trading, and risk.
Historical Quotes
Live minute-by-minute to nightly updates of the best quotes in the industry.
Dividends
A comprehensive view of forecasts and historical dividends.
Earnings
Get a robust feed of dates, status, and expected or implied earnings.
Blog
Support
About
Log in
Feb 21, 2019 • Earnings • Volatility • Data • contango • 2-min-read

Calculate Expected Implied Volatility After Earnings, A Lesson from Mom

When my mom asked whether she should sell some of her GRMN (up 16% yesterday after announcing earnings), I dug deep into the equity options data to see what happened. Were there any clues in the options market where I could have identified this trade?

It turns out there were signs in Garmin's IV term structure and in daily options volume. The volume was six times normal on the day before the move and the term structure was seven times as heavily skewed higher in the front months than normal, even after adjusting for earnings.

This adjustment for earnings is the crux of calculating the expected implied volatility after earnings and seeing the underlying creep in implied that occurred in GRMN in the days before earnings were announced. 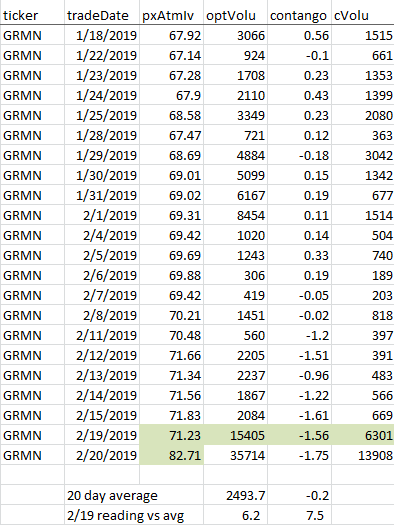 In the table above, the day before earnings were announced, option volume was 15,400 total contracts vs an average of 2500 per day and contango at -1.56 vs -0.2 average. Contango is the normal state of monthly implied volatilities when the front months are below the longer dated months. Here, a negative contango or backwardation, is a bright red flag reflecting GRMN's front month volatilities were well above the back months even after adjusting for the earnings effect in IV.

With the earnings effect stripped out, you get a way to compare IVs over time and estimate where the implied might fall after earnings are announced and volatilities settle down.