Wheel Web Platform
An all-in-one package for backtesting, scanning, trading, and risk.
Historical Quotes
Live minute-by-minute to nightly updates of the best quotes in the industry.
Dividends
A comprehensive view of forecasts and historical dividends.
Earnings
Get a robust feed of dates, status, and expected or implied earnings.
More APIs
State-of-the-art tools used internally by the developers at ORATS.
Blog
Support
About
Aug 22, 2018 • Markets • 1-min-read

ORATS data and comments appeared in a Reuters story on Tesla yesterday.

If options traders thought TSLA would get taken private the 1 year (and 2 year) IV would react lower. This initially happened but is now back to 8/6 levels.

Notice how the GREEN line dipped after the comments made after the black vertical line but then has come back to pre-comment levels.

The GREEN line is the constant maturity, 1-year implied volatility with the effect of earnings taken out.

ORATS extracts the earnings effect from implied volatility readings to provide a better metric for comparison over time. 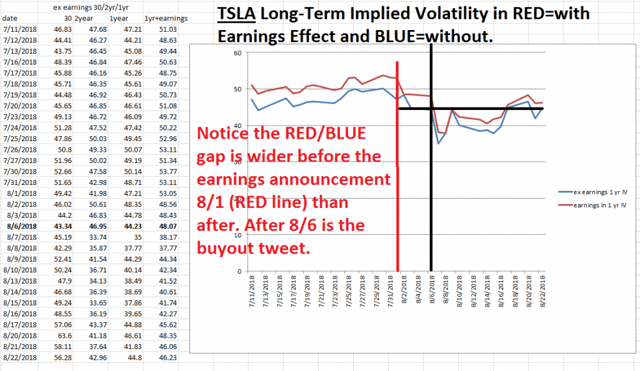